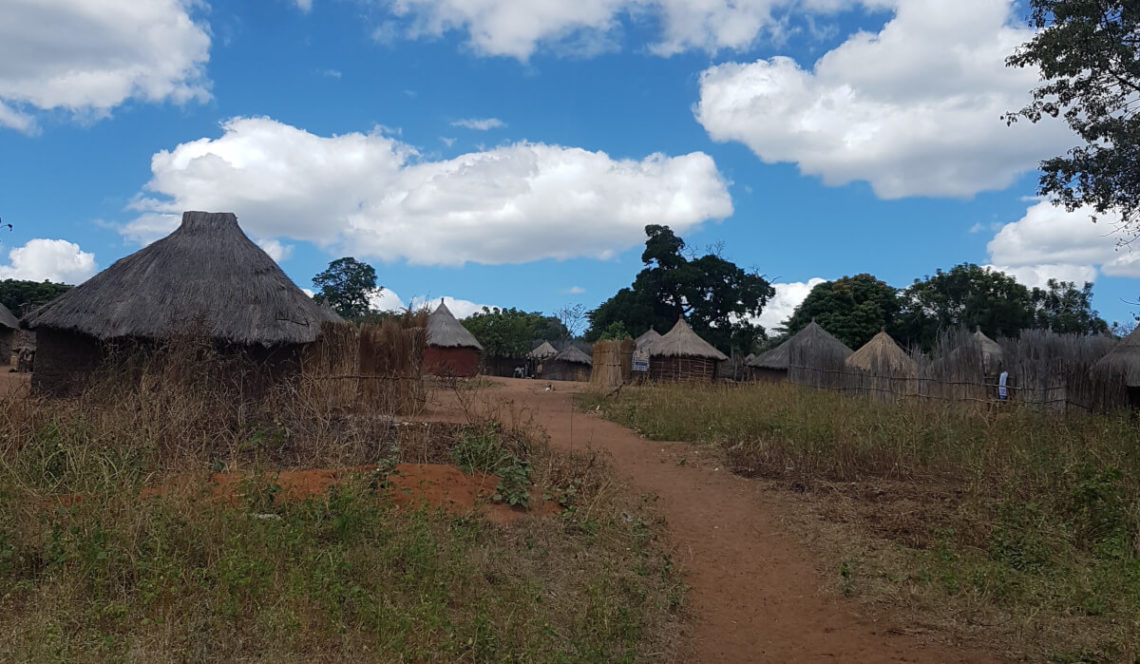 I was never a fussy eater as a child, but on the rare occasion I’d hesitate over a Brussels sprout I’d be treated to that set piece of Irish parenting many of you will recognise: “Eat your dinner – children are starving in Africa”. To my six-year-old mind, Africa was a faraway pit of mass starvation. As kids we competed to fill our Trocáire boxes with loose change every lent, and later harangued the neighbours for sponsorship after bravely signing up for a 24-hour fast. Still, every year emaciated children too weak to brush the flies from their faces gazed listlessly out of our TV screens during the ad breaks. Hunger was going nowhere.

As I came to appreciate the joy I derive from food – eating, growing, cooking, sharing – it occurred to me that hunger had only ever been a theoretical concept. I knew nothing about what it really meant to be hungry. And given the constant abundance in my fridge and at the supermarket, I began to wonder at the constant deprivation in these places I had never been.

My growing disquiet – along with a lifelong passion for the environment – eventually led to me pursue a degree in food security, and later to work in food security research. For anyone wondering if they might need a padlock for their fridge (!), here’s a nifty definition: food security exists when all people, at all times, have physical and economic access to sufficient, safe and nutritious food to meet their dietary needs and food preferences for an active and healthy life. To my mind, having enough food to eat is a fundamental human right. I wanted to understand why, in our world of plenty, nearly 800 million people are hungry. I wanted to know what could be done about it.

Many factors impact the ability of people to feed themselves: water scarcity, deforestation, soil degradation, overfishing, climate change, environmental destruction, migration, war, sanitation, health, gender inequality, income inequality, road infrastructure, political instability, inflation, currency fluctuation, trade policy, energy policy, agriculture policy… The list goes on. For my first foray into food security blogging I’d like to tell you about my most recent research assignment. Although I have been running the Légumerie full-time for just over a year, in May I had the opportunity to lead a food security assessment in rural Zambia for Concern Worldwide, an aid organisation working in the region. Maize is the staple crop in Zambia, but two consecutive poor agricultural seasons wrought by El Niño weather patterns resulted in a sharp decline in maize production, which in turn left many rural communities critically food insecure. Over two weeks I travelled 3,300km by road, speaking to poor people in rural villages to understand the challenges they face in trying to feed their families. 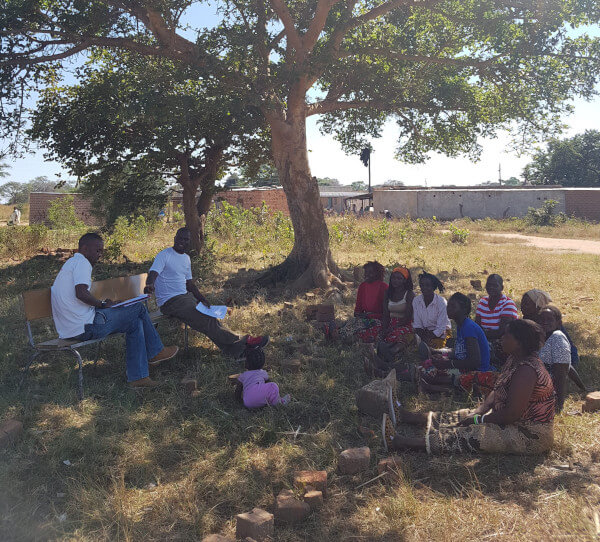 In the shade of a tree, discussing eating habits shaped by scarcity.

Many of the villages we visited were reached by an interminable, bone-rattling journey in a four-wheel drive vehicle along unpaved roads and dirt tracks. Poor road infrastructure makes it difficult and costly to bring supplies into these villages, but it also limits the potential for rural communities to generate income by sending their produce to market. As someone who lives in rural Ireland, even I found it hard to get my head around the sense of isolation. In one village I asked the group if they go to the town often. They laughed at my ridiculous question – it’s an eight-hour walk, so they might make the trip once a year. The nearest medical centre is in the town, they added, no longer smiling. 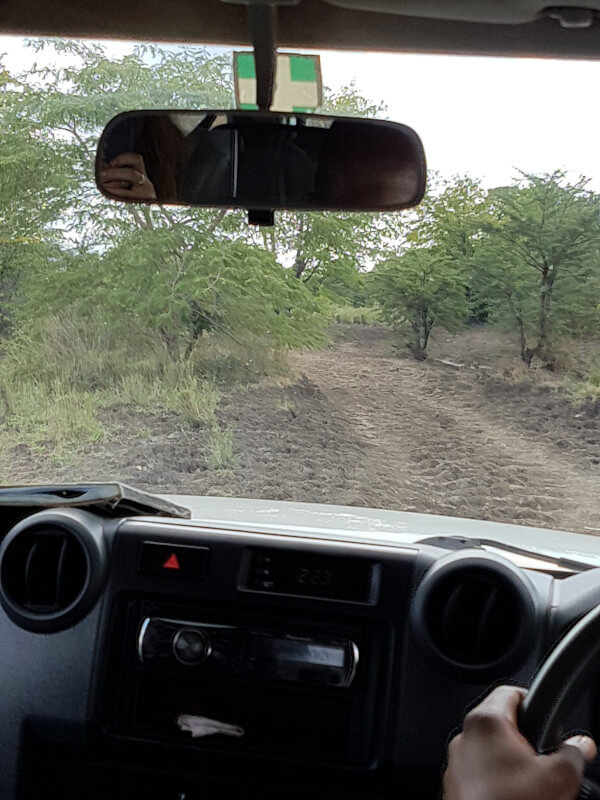 Off road the terrain is unpredictable, and skilled drivers are constantly on the
lookout for rocks and potholes. We covered 35km-40km per hour on these tracks.

Markets are mostly only found in towns or along the main roads, and given the distance and low levels of income, rural village households are heavily reliant on the food they grow themselves. It was harvest time when I visited and although the maize yield had returned to normal, thoughts of hunger were never far away. The food that is grown never lasts the year, and for four to six months there is not enough to go round. Food is sometimes sourced from the markets when home stocks have depleted but it is rarely affordable. Instead, what little food there is left is rationed. Three meals a day becomes two becomes one and portion sizes are reduced. Children are particularly vulnerable when food supplies begin to dwindle: indeed, it is estimated that 36 percent of children under five in the region are stunted (when a child’s height is below that expected of his or her age). Stunting, which is thought to be irreversible past the age of two, has lifelong consequences, including impaired cognitive development, lower productivity, a weakened immune system and greater risk of disease.

It is said that necessity is the mother of invention, and people in rural communities adopt a range of coping strategies to ease the deprivation. Barely have the vegetables been pulled from the ground than leafy greens, okra and strips of pumpkin are spread out on cloths to dry in the sun. Maize grain is stored in granaries. Those who can afford it spray chemical preservatives; those who can’t improvise with charcoal ash and dried cow dung. In areas like these where food is scarce, wild foods are an essential part of the diet – but even these are under threat. Many wild fruits and vegetables have disappeared with increased deforestation, and once plentiful river fish stocks have been overfished. Where possible, mushrooms and wild berries are dried and stored for when they are most needed. 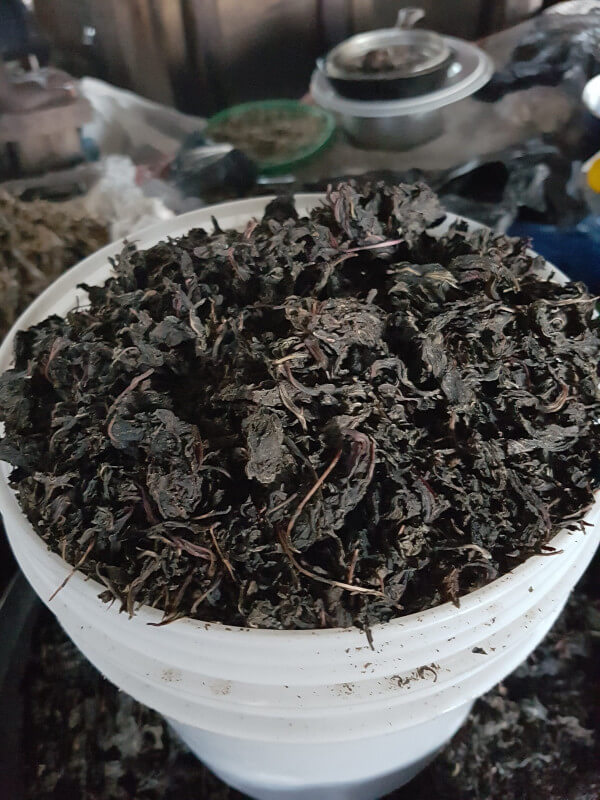 The maize crop is crucial in rural Zambia, not just for sustenance, but as a form of currency. Cash is barely used in these areas, and maize is bartered to acquire everything from clothes to cooking utensils. One community leader I spoke to explained that if a family runs out of maize grain, they can procure a sack from a local trader on condition that they return two sacks at the next harvest. This amounts to a loan with an interest rate of 100 percent. Negative coping strategies are common but only serve to perpetuate the cycle of poverty and hunger. 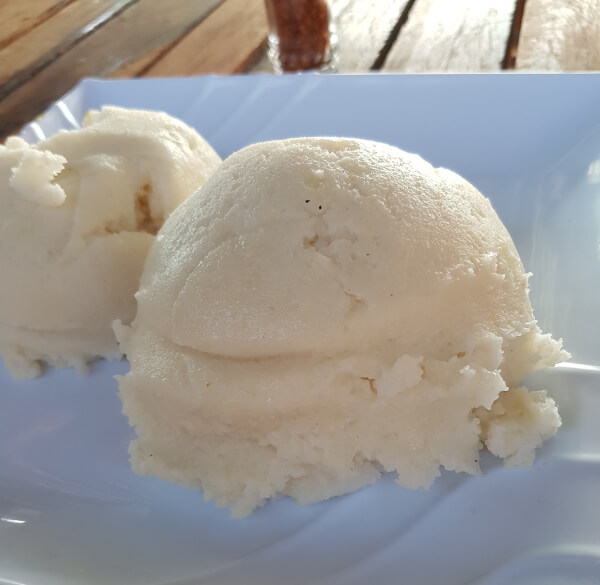 For many people living in rural Zambia hunger is a fact of life. The photograph below was taken in a village called Shapopa in Zambia’s Southern Province and shows fresh maize that has been destroyed by stalk borer. The women we spoke to pulled several ears of corn at random from a basket, and peeled them one by one to reveal the gnarled and rotted interior. These are never thrown away; children eat any kernels that can be salvaged. 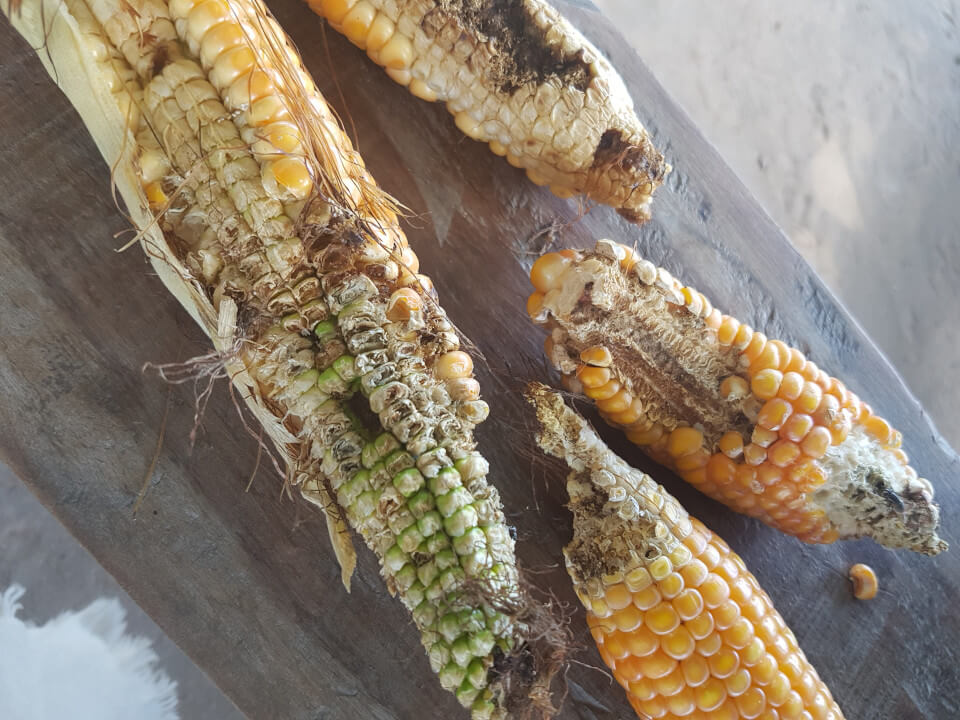 Fresh maize ravaged by stalk borer. These will not be
thrown away: every salvageable kernel will is eaten.

In writing this blog I hope to illustrate just a few of the problems facing rural farming communities in Zambia. It might make for heavy reading, but the situation is far from hopeless. This is not a region afflicted by war or famine, and much of the country’s land is rich and fertile. Sure, infrastructure is no easy fix, but there are many practical steps that can be taken to address the obstacles to food security described here. Throughout the developing world microfinance loans are enabling would-be entrepreneurs to start small businesses and help them to lift themselves out of poverty. Investment in better methods of food storage and preservation would strengthen food and nutrition security in rural communities. The development of drought-resistant seed has the potential to avert devastating food shortages. Educational programmes around nutrition and infant and young child feeding practices are already having a positive impact on rates of stunting. Micro-insurance schemes provide some level of security to rural farmers in the event that their crops fail, meaning they may not have to make the difficult choice between buying food and sending their children to school. Globally, nations must take greater responsibility for their contribution to the warming of the earth’s atmosphere, and recognize the devastating impact the resulting climate change has on poor communities in the developing world.

The proverb goes: ‘Give a man a fish, and you feed him for a day. Teach a man to fish, and you feed him for a lifetime.’ The irony is not lost on me (*cough* veggie blogger!!) but where aid is concerned, the principle is the same. Aid is not about handouts; it’s about providing the infrastructure for sustainable livelihoods and giving people the tools that will allow them to stand on their own two feet.

Hunger need not be business as usual.